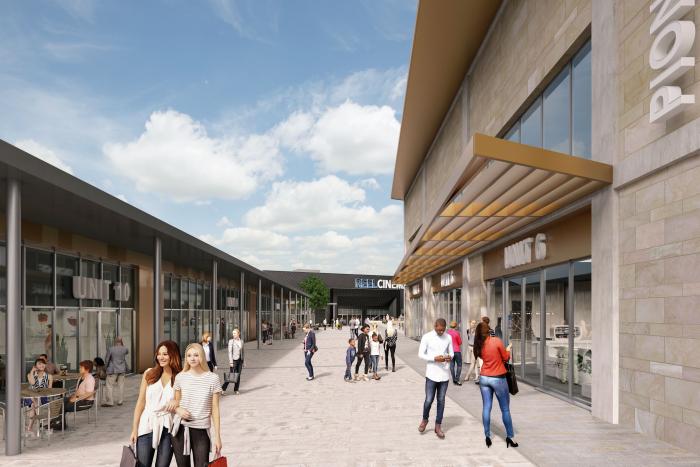 Burnley Council, owners of Pioneer Place, has announced that the scheme has received a significant boost, having signed agreements with Reel to bring an eight-screen, 18,134 sq.ft. multi-screen cinema complex to the Pioneer Place development, which will also include a restaurant plaza, shops and 125-space car park.

The complex will also have space for seven restaurant units and two shops.

Burnley Council leader Charlie Briggs said: “I am delighted that we have secured Reel Cinema as anchor for this exciting leisure and retail development. We have signed a deal with Reel to relocate them onsite into a new, purpose built, state-of-the-art cinema multi-screen complex.

“With the growth of the University of Central Lancashire in Burnley and the student population in Burnley set to grow ten-fold to 4,000 in the next four years, this new cinema and leisure offer will be great for the new students and a boost to Burnley’s growing university town status.

“This development will also be a major jobs boost for Burnley with the site once complete set to create over 300 jobs, as well as the many construction jobs which will be created in the development of the project.

“Burnley town centre has attracted a number of new businesses in the last 18 months including Primark, Easy Coffee, Quick Crepes, Millie’s Cookies, Carnivoro Brazilian restaurant, and The Corkhouse wine shop & bar. A recent report by independent experts said Burnley is ‘punching above its weight’ in terms of maintaining and growing the number of shops in its town centre. The Pioneer Place development will further establish Burnley as the leading shopping and leisure destination in East Lancashire.”

The council’s executive member for economy and growth, Councillor Gordon Birtwistle, said: “Burnley town centre is a thriving centre which we support with a calendar of events throughout the year which have attracted big visitor numbers and increased the footfall in the town. Burnley’s Summer Garden Party saw footfall increase by over 25%, the Burnley Literary Festival attracted over 5% increase in footfall and Burnley’s Christmas Party brought a 16.3% increase in footfall to the town centre.”

K C Suri, owner of Reel Cinema, said: “We are very pleased to announce that we have signed an agreement to open an anchor cinema at Pioneer Place.

“Burnley is a good location for us, with a thriving local economy. With its modern design, Pioneer Place will be a great addition to Burnley Town Centre attracting more visitors and creating a dynamic leisure environment.

Pioneer Place is being developed by Burnley Council in partnership with developers Maple Grove Developments.

Karen Hirst, managing director, Maple Grove Development, said: “We are really excited to be working in partnership with Burnley Council. The scheme is a major mixed-use town centre development and the signing of Reel to Pioneer Place is a major milestone in the project. We will be delivering an eight-screen cinema, which includes one VIP screen and will also include seven new restaurants/cafes/bars, looking to attract a number of national and regional operators as well as independent operators around a new piece of public open space. Pioneer Place will be a major addition to Burnley’s night time economy”.

Stephen Young, executive director of growth, environment, transport and community services, Lancashire County Council said: “We’re really pleased to be working with Burnley Borough Council on this exciting project. It’s important that we do what we can to develop the road network to support the continued economic growth in the town and help with its ongoing transformation.”